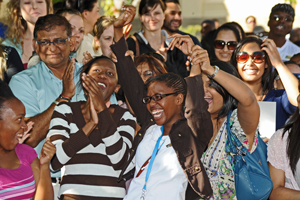 Jubilation: Joy was contagious at the recent announcement of the MBChB and allied health sciences results at the Faculty of Health Sciences. Among those eligible to graduate this week are 183 new doctors, 45 occupational therapists, 42 physiotherapists, 20 speech-language pathologists and eight audiologists. (See the "Trust me, I'm a (new) doctor" article. To view footage, please go to the UCT YouTube Channel).

The year-end graduation (15 to 21 December), the flagship event on UCT's academic calendar, will see a grand procession of thousands of undergraduate and postgraduate students through stately Jameson Hall, continuing a tradition dating back to the university's founding in 1829.

The Faculty of Commerce will cap 1 399 students in three ceremonies, a tally that includes 40 master's graduands and nine doctoral candidates. (2009: 1 310; 30 master's; seven PhDs.) The total includes 741 bachelor's and 142 honours graduands.

Numbers are slightly down in the Faculty of Engineering & the Built Environment, which will cap 683 students over two ceremonies, including 112 master's and 12 doctoral candidates. (2009: 736; 103 master's; 12 PhDs.) The total includes 456 bachelor's and 94 honours graduands.