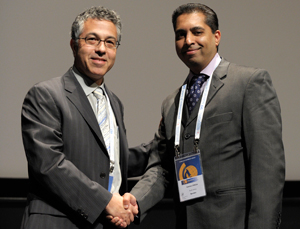 UCT's Associate Professor Keertan Dheda has been named the winner of the 2010 Union Scientific Award of the International Union Against Tuberculosis and Lung Disease (IUATLD).

This international award is made annually to a researcher under the age of 45 who has made an outstanding contribution to the field of tuberculosis and/or lung disease.

Dheda (director of the Lung Infection and Immunity Unit in the Department of Medicine) was singled out for his internationally cited and acclaimed research, which focuses mainly on poverty-related lung disease, including TB, HIV and pneumonia. The IUATLD lauded Dheda for his expertise in combating drug-resistant TB, and for his part in developing a programme that offers training and clinical services at the two designated hospitals in the Northern and Western Cape that deal with extensively drug-resistant tuberculosis - aka XDR-TB.

Dheda's work has influenced decisions and recommendations made by the South African National TB Programme and other leading international TB and health organisations. He is internationally recognised for his work in TB diagnostics, TB immunology and drug-resistant TB, and holds a patent related to new diagnostic technologies, for the further development of which he has received a grant from the South African Department of Science and Technology.

But, Dheda points out, the IUATLD award is a dedication to a team of collaborators, and to the hard work done in Africa.

"It is inspiring that all members of this team have been recognised for their hard work," he says. "It's also great advocacy for TB and diseases of poverty - and inspiring and significant that such an award comes to Africa, given that we are relatively under-resourced and poorly funded compared to American and European researchers."