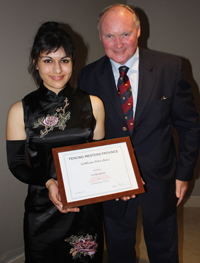 The UCT Fencing Club's cup spilled over at the annual Fencing Western Province Awards, held on 16 October at the Italian Club in Milnerton.

Both UCT fencing coaches, Len Davids and Glenda Pieters, were honoured with Lifetime Achievement Awards. Davids was the first black sportsperson to be awarded national colours, joining the South African Amateur Fencing Association (SAAFA) team for a tour of Europe and Israel in 1977; while in 1976, Pieters (as Glenda Benjamin) became the first black fencer to win a national title.

"Fencing for me is my life and my passion," says Pieters. "And it's a pleasure for me to be coaching young fencers."

Also at the WP awards function, Jacques Viljoen and Yasmin Hankel, both UCT fine-arts students, were named Sportsman and Sportswoman of the Year respectively. Finally, Hankel and Michael Malahe received trophies honouring them as the province's ranking champions for 2010 in their respective categories: Hankel in the senior women's foil, and Malahe in the senior men's epée.

Viljoen is also the top-ranked fencer in senior men's foil.