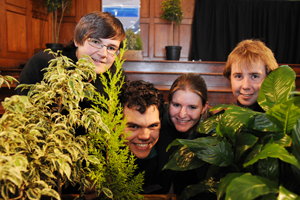 A green building management system designed by a team of third-year students took top honours at the 2010 BSG Information Systems Expo at UCT on 28 October.

The expo is organised annually by the Department of Information Systems to showcase projects by third- and honours-year students.

The winning third-year team of Kate Dawe, Nick Kuilman, Richard Pilkington and David Scheepmaker developed a management system for the Bandwidth Barn, an incubator for entrepreneurs under the umbrella of the Cape IT initiative. Their innovation is a tenant management system that allows building administrators to provide world-class service to their tenants while cutting down on the building's carbon footprint.

The system allows the tenants to liaise directly with the building administration about complaints and maintenance issues, book the communal boardrooms and automate the office rooms to cut down on electricity and provide electrical analysis.

Chief executive officer of BSG Greg Reis said he'd been impressed by the "awesome job" the students had done.