Ultimate throws down the gauntlet 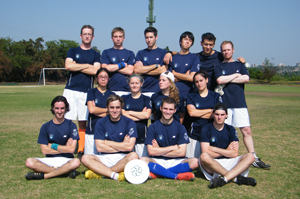 Travelling to Johannesburg, UCT Ultimate celebrated the closing of their first year as a card-carrying UCT club with a second-place finish at Rocktober 2010, said to be the biggest Ultimate - aka Ultimate Frisbee - tournament in Africa.

UCT won their seven opening games, enough to pip defending champions Chilli for a spot in the final even though they would lose their final pool game against their fellow Capetonians 6-7.

In the title clash they were up against sentimental favourites Long Donkeys of Pietermaritzburg, oft-losing finalists in previous years. And though the students would put up a brave fight to take a 7-6 lead, they couldn't match the Donkeys for experience, height and speed, eventually succumbing 8-12.

Despite the defeat the young team earned the respect and praise of their rivals, reports Jon Luies, one of the UCT captains.

"We made the finals, which was my personal and our team goal," says Luies. "We played very sexy, very patient Ultimate - a brand that I hope UCT will carry into the future."

(Anyone interested in joining the club can email Luies or find the team on the Woolsack fields on middle campus at 16h00 on Wednesdays.)