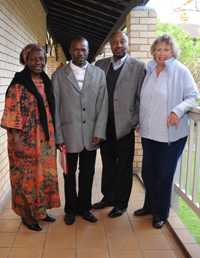 Off the blocks: Nehemiah Chivandikwa (second from left) is the first fellow on the All Africa House Fellowship. He was photographed with Prof Chuma Himonga, DVC Prof Thandabantu Nhlapo and Assoc Prof Gay Morris.

UCT's first fellow on the All Africa House Fellowship has settled in; setting the tone for UCT's Afropolitan aspirations.

On the face of things the intimate seminar at All Africa House on 14 October was no more than that - a gathering of scholars and students, no different really from the multitude of such meetings that are conducted around campus every day.

But scholarly interest apart, the event was remarkable for one more reason. It was presented by Nehemiah Chivandikwa, a doctoral candidate and lecturer in the Department of Theatre Arts at the University of Zimbabwe, who also happens to be the first fellow on the All Africa House Fellowship programme, funded by the Vice-Chancellor's Strategic Fund.

Yes, sure, All Africa House has hosted a procession of visiting African scholars over the years, notably those on the University Science, Humanities and Engineering Partnerships in Africa programme, aka USHEPiA. This is the first time, however, that the House has welcomed a fellow under the auspices of the Strategic Fund and in direct implementation of the 'mobility' aspect of the Afropolitan strategy.

If one of the aims of Afropolitanism is to get scholars from the rest of Africa to visit the university for short periods for a range of different purposes, Chivandikwa's visit was the opening gambit.

"What is happening tonight is by no means the only example of Afropolitanism," says deputy vice-chancellor Professor Thandabantu Nhlapo, who launched the programme officially. "But it is the one aspect that, to my mind, is probably the easiest to institute and manage - the travel. The core idea of the Afropolitan goal is to accelerate traffic between UCT and the rest of the continent."

Traffic is exactly what Professor Chuma Himonga, warden of All Africa House and NRF/DST Chair in African Customary Law has in mind for the House. She's keen to see the programme expanded beyond the three initial fellowships being funded by the Strategic Fund.

The fellowships programme was established to offer fellowships to three young or mid-career Africa-based academics to come to UCT for a stint of three months to develop their teaching materials or write up completed research for publication. The main aim of the fellowships is to build capacity for research and teaching in universities on the African continent.

"As the House is meant to link UCT with Africa, this is something I have envisioned for the House since I became warden here," she says. "This is really a fulfilment of that vision."

In the meantime, Chivandikwa, one and a half months into his three-month stay with the Department of Drama, is making the best of his time here.

"The department is one that has diverse and multicultural approaches - a lot of European practices and a lot of African sensibilities, which is good for an international university, as it were," he says. "And the department is very strong in the practice of theatre, where I stand to benefit a lot."

His UCT host, Associate Professor Gay Morris, believes the learning will go both ways. Like Chivandikwa she works in the field of applied theatre - theatre used in the service of social development, voter education, medical education and the like - and has been grappling with theorising a model for this kind of theatre in Africa, small as the discipline may be. A while back Chivandikwa's MPhil thesis - on theatre in Zimbabwe schools - crossed her desk, with a request for her to serve as external examiner.

"I found his thesis absolutely fascinating because it was dealing with the same issues; of how does he find the right theoretical template in which to talk usefully about theatre," she said at the seminar.

Chivandikwa is unlikely to come up with all the answers in his three months at UCT. But he and UCT scholars can now contemplate the questions in close proximity to each other, and put some mileage on UCT's Afropolitan engine.

"The fellowship gives us the opportunity to say to others who may not have picked up on the Afropolitan 'thing' that, at its best, this is the way it's going to be playing out," says Nhlapo.

Nehemiah Chivandikwa is currently enrolled for a PhD in the Department of Theatre Arts at the University of Zimbabwe, where he also lectures. His doctoral work is titled Disability Participation and Empowerment in Theatre for Development: A University of Zimbabwe project. He has participated in a number of applied theatre projects, including Co-ordinating the Chosen Nation: Theatre for Development project on disabilities; and Foreign Affairs: A community play on African diplomatic relations, commissioned by the Nigerian and Tanzanian embassies. For his All Africa House seminar, Theatre and/as Insurrection in Zimbabwe, he explored how the play Decades of Terror (director Sam Ravengai was in the audience) negotiated censorship, the use of symbols and signs, aesthetics, audience expectation, "reasoned persuasion" and propaganda, and the demands of protest theatre.