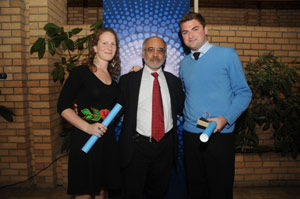 Because of his abundant achievements, almost everyone foretold that the 2009/2010 Students' Representative Council president, Sizwe Mpofu-Walsh, would walk away with this year's coveted Vice-Chancellor's Student Leader Award.

And when the announcement was made at UCT's annual Student Leadership Awards on 21 October, Mpofu-Walsh, who also scooped the Kerry Capstick-Dale Student Leader Award along with Dylan van Vuuren of Rainbow UCT, received a deserved standing ovation.

Described as an "inclusive, principled, team-oriented and inspirational leader", Mpofu-Walsh is a member of UCT Council, the Senate, the South African Union of Students' Extended Executive Committee, the Board of the South African Peace Alliance, and of the One Young World Africa Initiative. He also brainstormed and helped organise the successful inaugural African Student Leaders Summit, which was hosted by UCT in September.

The following awards were also presented on the night:

Deputy vice-chancellor Professor Crain Soudien noted that he was moved by the total sense of giving the UCT students are demonstrating, many of whom were not among the award winners. As a public university, Soudien added, it is important for UCT to have confidence that it is sending quality individuals into the world.

Turning to the winners, Soudien said they represent "selflessness" in which self-gratitude counts as the least important.