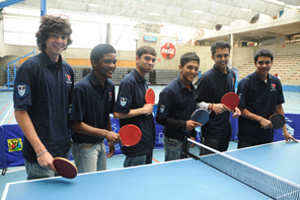 Winning a third-division knock-out tournament may hardly seem newsworthy, but for UCT's Table Tennis Club the triumph is but the first stepping stone in a whole new game plan that could well see them leapfrog into the top tier.

The club was a no-show in Western Province Table Tennis events last year, reports chairperson Sulayman Salie. For 2010, the club's new committee not only made sure that they had teams taking part, but also paid more mind to training and preparation. Thanks to some new recruits, they were also able to bolster the first team with provincial and national under-17 and under-19 caps.

Because they'd skipped a season, the first team - made up of Salie, Wafeeq Domingo, Nu-Azzan Kippie, Adnaan Parker and Dane Stewart - was obliged by WP to step into the third division, the fourth tier of the seven leagues in the province. Unfortunately, the team missed games because of exam commitments so wasn't exactly a juggernaut in the league, but they had it much their own way in the knock-out event.

Now there's a good chance, says Salie, that the team could be promoted to the premier league in 2011 because of its overall performances.

Good news is that the first team will be able to build on this year's track record, as the composition of the team will stay much the same.