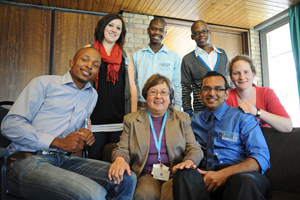 Students spoke out to the media about UCT's controversial admissions policy at a press conference hosted at the Faculty of Health Sciences on 1 October.

Welcoming the media, faculty dean Professor Marian Jacobs acknowledged that using race as a proxy for disadvantage in their admissions process had been under the media spotlight recently.

For this reason, she explained, the media had been invited to discuss the issue with senior medical students, who shared their experiences and opinions.

"UCT was the only university I applied to because it was only university with an admissions policy that gave me a chance to be accepted," said final-year student Marwala Pule, who added that he was the only learner from his 50-strong matric class to make it to university. "Now I'm definitely graduating as a doctor because of the support for students with my background."

Fifth-year student Thadathilankal Jess John said that although UCT plays a huge role in addressing the differences between students, race shouldn't be used exclusively as a proxy for disadvantage.

"Although we use race as a proxy now, we already notice other social factors which should be included, such as family background and income," said John.

"There was already a quota system in place for race and gender when I applied," said student leader Allison Powell, "but it has always been a clear and transparent system. It doesn't worry me in any way because I actively understand the reasoning behind it."

Powell also noted that the system allows the university to produce qualified medical practitioners from diverse backgrounds. "I've had to learn Xhosa, but I'm not very good at it, so I might not be the best doctor for a patient who speaks only Xhosa."

Lwando Mpotulo agrees with Powell's last point. "In my community, nurses and teachers were the highest-qualified people. Now UCT is producing doctors who are familiar with this background."

Mpotulo failed his first semester in first year. "I went through all sorts of support programmes," he says. "After failing I entered the intervention programme, but even before that people were already trying to help me.

"I never feel inferior to my white counterparts," says Mpotulo. "I was at a disadvantage, but that can be overcome."

Now in his fifth year and on the dean's merit list, Vuyane Mhlomi suspects that the admissions policy was the only reason he was accepted by UCT, because his application to Stellenbosch University was rejected.

"This was my first experience of learning with whites, and the impression I received going into first year was that whites are the top students in the country," he said. "So when my first results came back and they were better than many white students', I was quite shocked!"

Mhlomi says that school results are a poor indicator of how a learner will perform at university, but race is still the best indicator of disadvantage. He points out that once accepted, students who come from disadvantaged backgrounds still have to work just as hard, if not harder, than other students to earn their qualifications.

"If not for the admissions policy, students like me would never have made it," he says, "and I think I deserve to be here."

"There is no question that black students are disadvantaged; so right now, race is the major measure," said student Shannon Calloway. "UCT is putting a huge effort into producing graduates who are appropriate for the country, doctors who don't simply accept the norm."

Jacobs agrees. "Our goal is to produce graduates capable of working in primary health care in South Africa who care about human rights and about their integrity."

Jacobs told the media: "The admissions policy is not just aimed at redressing our history, but also our curriculum, in the method and in the places we teach."