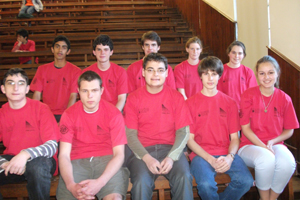 The IPMO has been a regular annual event since 1990. Teams of ten from different provinces meet in various centres in friendly competition. The IPMO has junior (up to Grade 9) and senior (Grades 10 to 12) divisions.

This year's IPMO was also contested by teams from the Eastern Cape, Free State/Northern Cape, Gauteng North, Gauteng South, KwaZulu-Natal Coast, KwaZulu-Natal Midlands, and KwaZulu-Natal North Coast. Many provinces entered more than one team in each section, bringing the total to 21 junior and 16 senior teams.

"There was a lot of friendly rivalry," said UCT's Professor John Webb. "Performance in the UCT Mathematics Competition, held in April this year, was a major factor in the team selection for the Western province and Boland teams."