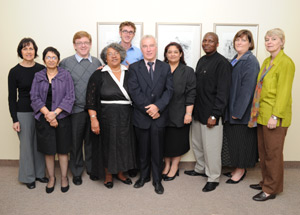 Partners: Toasting a new exchange agreement were (left to right) Berene Kramer of the EU delegation, Nasima Badsha of CHEC, Stellenbosch University's Robert Kotze, Merle Hodges of CPUT, Matt Tips of the University of Leuven, Joachim Fronia of the EACEA, Lorna Holtman of UWC, Mahlubi Mabizela of the Department of Higher Education & Training, and UCT's Lara Hoffenberg and Nan Warner.

The Cape Higher Education Consortium (CHEC) has received a prestigious student and staff mobility award, in partnership with Nelson Mandela Metropolitan University and a consortium of eight European universities. The award, one of three grants made to South African universities, exceeds €1.6 million and was made under the Erasmus Mundus initiative of the European Union (EU).

The project is intended to foster institutional co-operation in higher education between the European Union and South Africa through student and academic exchanges. It is anticipated that 106 South Africans will benefit from the scholarship scheme and will be able to spend some time (between one and 35 months) at one of the EU partner universities - the University of Leuven, Belgium; Freie Universitat Berlin, Germany; Pierre et Marie Curie Université, Paris; Karolinska Institutet, Stockholm; Masaryk University, Brno; Universidad de Granada, Spain; University of Amsterdam, Netherlands; and the University of Antwerp, Belgium.

CHEC member institutions - UCT, the Cape Peninsula University of Technology (CPUT), Stellenbosch University and the University of the Western Cape (UWC) - recently hosted a visit to the region by Joachim Fronia of the Education, Audiovisual and Cultural Executive Agency (EACEA), which is responsible for the implementation of the EU's Erasmus Mundus programmes worldwide. A delegation from the four Western Cape universities will shortly attend a meeting at the University of Leuven, which serves as the lead institution in the partnership, to finalise the details of the programme.