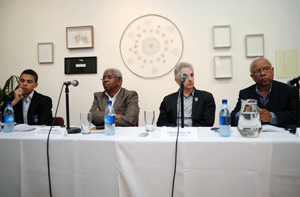 Opinions and loyalties were divided as panellists and audience members expressed their views on UCT's admission policy at a debate hosted at the Centre for African Studies on 2 September.

While most agreed that some form of redress is needed in South African society (and in who gets a seat in a UCT lecture theatre), there was no such like-mindedness on the afternoon's bone of contention - the use of race as a proxy for disadvantage in UCT's admissions policy.

On the panel, vice-chancellor Dr Max Price reiterated the university's stance that for now, race serves as the best proxy, as the vast majority of South Africa's disadvantaged are black.

In contrast, Professor Neville Alexander, Price's opposite number in recent media debates on the topic, argued that the use of old labels would undermine any effort to create a non-racial, multicultural South Africa, and instead retrench racial identity and racial prejudice.

In turn, Sizwe Mpofu-Walsh (president of the Students' Representative Council) supported using race as a proxy for a while, saying that racial schisms run so deep that even black students fortunate enough to have attended an academically respected school would not automatically shake off all disadvantage.

Professor David Benatar then suggested that the years-long debate has now progressed to a stage that even proponents of the race-as-proxy approach are uncomfortable with it, and singled out some of what he called the "distasteful" and potentially "dangerous" practices of racial classification at UCT.

Finally, the chair of Council, Reverend Njongonkulu Ndungane, drew from his own pastoral experiences to underscore the value that black students and parents place on a spot at a university.

Session moderator Judge Dennis Davis then cross-examined the panellists. How could South Africa ever realise its ambitions of creating a non-racial society while still asking people to apply apartheid-era classifications to themselves, he asked Price.

On the other hand (he asked Alexander), if the university did nothing and did not use race as a proxy, would it not end up as the same "pristinely white university" that he (Davis) experienced in his days as a student? And why should a black student and a white student from a good school not be measured by the same yardstick, he challenged Mpofu-Walsh.

While answers were few (listen to the podcast for some more questions and suggestions), Price did point out that UCT is working on a new measure for disadvantage, and could well implement such a measure within the next few years.

Summing up, Davis commended the university for staging the discussion.

"But quite frankly, what is absolutely clear to me from this debate is that we've got a long way to go before we can actually get some consensus on how we resolve the problems of the past and move forward.

"The more debates we have at this university on these issues, the more we become a university community."

(Listen to the pod cast, view the video or read the transcription of the debate at here)