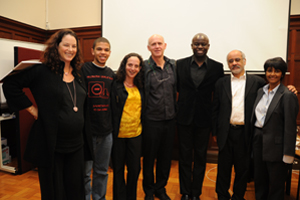 Darkoh applauded the institution's programmatic response that has helped keep prevalence much lower than the national average, and stressed that the good job should be rewarded with further resources. "This is a call to action," stated Darkoh, arguing that in public health terms, anything over 1% would normally be considered a massive failure and a severe crisis. Efforts at prevention should be maintained as UCT continues "shaping individuals who will define the future".

Kevin Kelly, one of the survey researchers, spoke highly of UCT's management response to the HI virus. He detailed the adverse impact of sexual concurrent relationships, alcohol, peer pressure, high age differentials and lack of knowledge of STIs in driving the epidemic at HEIs. He stressed the need for a person to receive adequate counselling when testing for HIV, and also to know their partner's status - 70% of students have tested on campus - although he referred to research that suggests behaviour does not change if a person tests HIV negative. He also described the elevated risk of men who have sex with men, and emphasised the need for service staff at the institution to receive more prevention messaging, care and support, in line with survey results.

Cal Volks, HAICU director, described favourable evaluation results of student peer education, research on students living with HIV, communication campaigns that are evaluated; and policy co-ordination. She also applauded student involvement and their leadership response. She stressed the need to intervene in the context in which HIV is transmitted, and in particular to explore gender dynamics, alcohol abuse and HIV and AIDS messages around the risks of concurrent sexual partnerships. Also, HIV education that targets appropriate disciplines should be brought into the formal curriculum of all faculties, with an emphasis on the personal and professional aspects of HIV. Volks highlighted the positive impact of some UCT HIV and AIDS curriculum interventions: those in health sciences and commerce, and recent pilot initiatives in the engineering and built environment and science faculties. She spoke of the challenge to implement these pilots as component parts of faculty courses.

In closing, the chair Nalini Naidoo, director of the international communications company Fleishman-Hillard, echoed the words of Darkoh, commenting that even more vigour is needed in UCT's response to the epidemic. "It would be an absolute tragedy if momentum were lost."