Track record a credit to researchers 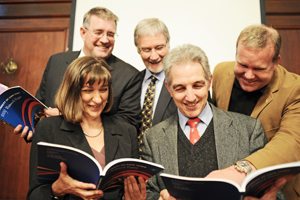 Good reading: At the launch of UCT's 2009 Research Report were (from left, back) Dr Albert van Jaarsveld of the NRF, deputy vice-chancellor Prof Danie Visser, guest speaker Prof Lee Berger of the University of the Witwatersrand; and (front) Dr Marilet Sienaert, director of UCT's Research Office, and Dr Max Price.

Though not one given to self-congratulation, there was cause for a little bragging, vice-chancellor Dr Max Price noted at the launch of the 2009 Research Report.

UCT's standings are up in the world's leading research-based ranking systems, as is the university's publication count for 2009 (by 6.8% over 2008). The number of researchers rated by the National Research Foundation (NRF), at 322, remains the highest in the country. Research income grew by 18% to R769 million over the year. Faculties are paying greater attention to the impact of their research. The new Vice-Chancellor's Strategic Fund is pumping money into 29 research projects. And the university's force of postdoctoral research fellows now makes up 40% of the national tally.

"It is a track record that is a credit to the people in this room," Price told the researchers at the launch.

But there are concerns, he pointed out, notably the ever-growing student-to-staff ratio that is putting more teaching and administrative demands on researchers, and the nagging funding concerns.

"So we have to make a serious effort to persuade the minister and ministry to maintain its funding of the university."

There was some good news on that front from Dr Albert van Jaarsveld, president and CEO of the NRF. He reported on the latest developments at the organisation, including new money being made available for researchers through the Rated Researchers Incentive Funding programme.