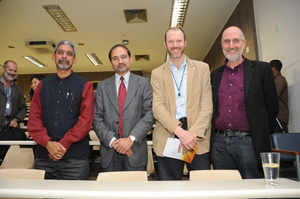 Scholarly nexus: (From left) Speaker Prof Vikram Patel, Dr Shekhar Saxena of the WHO, UCT's Prof Crick Lund and Prof Leslie Swartz of Stellenbosch University were among those to attend the launch of the Centre for Public Mental Health and the Alan J Flisher Memorial Lecture series.

The two departments established the centre as an independent, inter-disciplinary academic research and teaching hub for public mental health promotion and service development in Africa. The initial work of the centre, five years in the making, will build on the groundbreaking Mental Health and Poverty Project, led by a team of researchers from the Department of Psychiatry and Mental Health at UCT.

The establishment of the centre has been supported by the WHO's Department of Mental Health and Substance Abuse in Geneva, the WHO African regional office in Brazzaville, and a number of national and international experts in the field.

"We envisage the centre being a nexus for African and international scholars to come together to address the pressing mental health questions facing the continent," said Stellenbosch's Professor Tony Naidoo at the launch at Valkenberg Hospital.

Professor Crick Lund, chief research officer at UCT's Department of Psychiatry and Mental Health, no-ted that the centre will bring together a number of innovative researchers and mental health practitioners. "By conducting research and building capacity for public mental health in Africa, we hope we can carry forward the legacy of Alan Flisher's work," he said.

The Alan J Flisher Memorial Lecture series will run as an annual feature of the centre. Flisher, who died in April this year, was a pioneer in the field of public mental health in South Africa. He was the Sue Struengmann Professor of Child & Adolescent Psychiatry and Mental Health at UCT, and was also director of the Mental Health and Poverty Project.

The inaugural lecture was delivered by Professor Vikram Patel of the London School of Hygiene & Tropical Medicine.