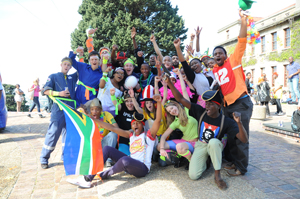 Pick me: Nominees for election to the SRC. Voting will take place from 23 to 27 August.

Politics is never usually this much fun. (Not on purpose, anyway.)

The 30 nominees for the upcoming Students' Representative Council elections were presented to the UCT student body in style on 12 August when they took one another on in trolley races, dancing and music performances.

It was all to encourage students to participate in the upcoming election process, which began with a launch on 16 August and Q&A sessions from the same day until 20 August, and continues with voting from 23 to 27 August.

With 46% of candidates, the Faculty of Humanities boasts the lion's share of nominees, followed by commerce and health sciences at 23% and 10% respectively, while the law and the engineering & the built environment faculties are level at 7% apiece.

Most candidates are in the second year of their studies (47%), followed by third-years at 27% and first-years at 20%.