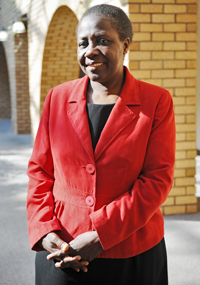 One of UCT's top law scholars, Professor Chuma Himonga, has been awarded the DST NRF Chair in Customary Law, part of the South African Research Chairs Initiative (SARChI). There are 82 chairs nationally and UCT holds about one third of these.

A delighted Himonga (LLB University of Zambia; LLM Kings College, London; PhD London School of Economics and Political Science) said the chair would create greater prospects for the development of research, the generation of knowledge and inclusion in the intellectual life of UCT of an area of law that regulates the lives of millions of South Africans.

"The challenges customary law faces and creates in relation to human rights and its application by the courts in changing social and legal contexts require serious investigation and scholarship. It is my hope that the award of this chair will create new inspiration for colleagues at this university and elsewhere to get to grips with this system of law through debate and collaborative research."

Her research will focus on the actual workings of customary law as a normative system and as part of the South African legal system, against the backdrop of legal pluralism. It will also examine how customary law intersects with other components of the system, including common law and human rights.

"Within the pluralistic nature of African legal systems, and against the colonial historical backgrounds of African countries, customary law plays a very important role in the regulation of people's lives, especially in family, gender relations, traditional leadership and land matters," she added.

"The recognition of this law by the Constitution of South Africa has heightened its relevance and significance in the legal system. Moreover, the courts are constitutionally obliged to apply customary law and, if necessary, to develop it in accordance with the spirit, purport and objectives of the Bill of Rights.

Himonga said that although the Constitution also requires customary law, like any other law, to be aligned with the Bill of Rights, little is known of the field in its current form. This is due both to the dearth of research and the marginalisation of customary law in the colonial and apartheid legal systems.

"The research of the chair is intended to increase the understanding of customary law as a dynamic system, as well as its actual workings within modern constitutional frameworks. At the same time, the chair will serve, firstly, as the nexus between research, capacity building and teaching in customary law, through undergraduate and postgraduate teaching, and, secondly, as a base for building a body of scholarship and a young generation of scholars in South Africa and the rest of the continent.

The announcement also has institutional implications, as the chair is positioned to enhance UCT's Afropolitan vision through the development of scholars from other African countries and the consolidation of the chair's involvement in regional postgraduate teaching and research, especially at the Southern and Eastern African Regional Centre for Women's Law (Himonga contributes to the teaching of a regional master's programme at the centre).

This was endorsed by law dean Professor PJ Schwikkard: "The award of the chair is tribute to Professor Himonga as a customary law scholar. The faculty is honoured to host the chair, which has a direct link to the faculty and university's strategic goals of being transformative and Afropolitan."