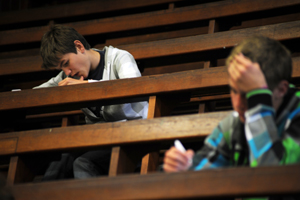 Maths mettle: Learners had to stretch themselves at the UCT Invitational Challenge.

About 130 high-school learners were pushed to their brain-wracked limits when the Department of Mathematics and Applied Mathematics hosted the UCT Invitational Challenge on Saturday, 31 July.

The event did double duty, kicking off national Maths and Science Week in the Western Cape.

A follow-up to the UCT Mathematics Competition in April, the Challenge pitted the top performers in grades 8 to 12 from that event against some truly knotty mathematical brainteasers. In part, the Challenge served as prep for those who will take part in the upcoming provincial and national maths olympiads. (All the participants in Saturday's event are eligible to sign up for the group-based Inter-Provincial Mathematics Olympiad, scheduled for September 11.)

The event is also designed to measure the learners' mathematical mettle.

"It's all material that they should be able to understand in terms of their grades," says competition director, Emeritus Professor John Webb, "but it's not the standard school things. These are different kinds of problems."

The Challenge also stacks them up against their global counterparts. The grade 8 and 9 paper, for example, was drawn from the 2009 Netherlands Mathematical Olympiad, says Webb. "So the learners are writing at an international level."