UCT duo on the world stage 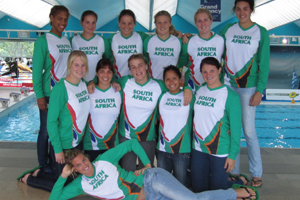 Better than before: UCT's Kim Kay and Laura Barrett were among the South African water polo team that took part in two recent World League Championships in Europe.

Laura Barrett and Kim Kay were part of the squad that played against France, Spain, Greece and Netherlands in the championships, held in Greece and France over 9 to 21 June. Barrett said the team improved in every game, and earned their closest yet finish against European competition when they lost 10-14 to France.

"It was a remarkable feat," Barrett explains. "The girls were fitter and stronger." A contributing factor to the team's improvement, Barrett says, was that they had practiced as a squad before going, which is rare for the South African team.

The team's next challenge is the Commonwealth Games in October, where they hope to do even better.