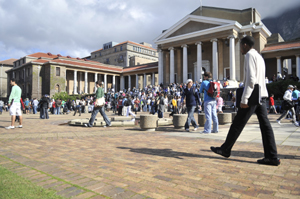 While the Mother City prepares to welcome thousands of world cup soccer fans, UCT is gearing up for a mid-year celebration of its own. Some 1 293 candidates (including the Graduate School of Business) will graduate from its six academic faculties on 3 and 4 June, among them 673 postgraduate students. They will include 83 PhDs, 29 of whom will graduate from the science faculty.

In what is believed to be a milestone for UCT, the first woman orator, Professor Alison Lewis, head of the Crystallisation and Precipitation Research Unit in the Department of Chemical Engineering, will deliver the citations for the honorary doctoral candidates.

At 47, Lewis is probably among the youngest - if not the youngest - of the university's recent orators. Succeeding Emeritus Professor Francis Wilson, it's thought that Lewis is the first woman to be formally appointed to the position. (Although registrar Hugh Amoore reports that women have donned the gown on ad hoc occasions.)

And although she will not preside at this year's June ceremonies, UCT will also celebrate GraÃ§a Machel's reappointment as chancellor. In March, Machel, listed in the annual Time 100 issue (Time May 10, 2010) as one of the world's most influential people, was elected unopposed as chancellor of UCT for a second term. Her new term of office will end in 2019. She is the fifth chancellor of UCT since the South African College became the University of Cape Town in 1918.

The chancellor is the titular head and representative of the university, and confers degrees in its name. UCT's first chancellor, Edward, Prince of Wales, later to be Edward VIII and the Duke of Windsor, took office from 1918 until his accession. He was succeeded by General Jan Smuts, who was chancellor until his death in 1950. The next chancellor, who held office until 1967, was Chief Justice of South Africa Albert van der Sandt Centlivres. He was succeeded by Harry Oppenheimer.

Until Oppenheimer decided to retire after 29 years in office, the chancellor held office for life. At that stage a change was made to the statute; a chancellor could be elected for a 10-year, renewable term of office, and by an electoral college rather than by a vote in Convocation. Machel was the first to be elected under the new dispensation.