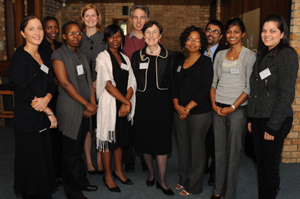 Past and present: VC Dr Max Price and Dr Reno Morar, deputy dean for health sciences, joined UCT alumnus Prof Mary Robertson (middle) at a cocktail function with former and current medical students who have benefited from her awards and scholarships.

Building inspirations and aspirations were key objectives when eminent neuropsychiatrist and UCT alumnus Professor Mary Robertson welcomed recipients of her awards and scholarship - all but one, UCT graduates - to an "educative and bonding" weekend.

Robertson, an eleventh-generation South African who was the fourth generation of her family to graduate from UCT, jetted in from the UK recently to meet with the eight.

Robertson graduated from UCT in 1971 and received a Doctor of Medicine (MD) in 1983. She was the first woman to receive a Doctor of Science in Medicine (DSC [Med]) from UCT, in 2006, and only the ninth recipient ever.

She instituted her suite of awards and scholarship in recognition of her DSc [Med] and her family's enduring relationship with UCT.

"I was so excited about it [the DSc] that I decided to plough something back," she explained. The DSc [Med] is the Faculty of Health Sciences' most senior doctorate, rarely awarded and only to persons of "exceptional academic merit" on the basis of original published work.

At a cocktail function held in the faculty's MAC Club, UCT vice-chancellor Dr Max Price presented Robertson with a gold pin in recognition of her "generous" donations as a member of the Chancellor's Circle, a society of donors who have each given R50 000 or more to the university.