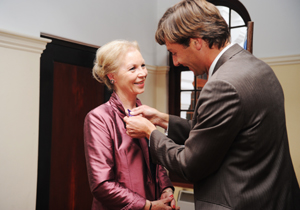 The French government honoured Dr Vanessa Everson of the French Section in UCT's School of Languages and Literatures with the Chevalier des Palmes Académiques award, at a function on 18 May.

Founded in 1808 by Napoleon Bonaparte, the Chevalier des Palmes Académiques (knight of academic palms) is an order of knighthood bestowed on those who make major contributions to French education and culture.

Everson's research areas - such as teaching French as a foreign language, translation and modern language methodology - have transformed the teaching of French at UCT. After modernising the syllabus and retraining and mentoring the teachers, Everson designed courses on French and the media, on the practice of translation, and redesigned the Business French course. Everson also pioneered the honours and master's qualifications in teaching French as a foreign language - the first of their kind in South Africa.

Speaking at the award function, Everson said her work stems from her belief in responding to the regional needs of students, and a need for the shared construction of knowledge and skills transfer.

"French is my passion," said Everson, "and fortunately, I haven't worked in isolation."

"The students I've had the privilege of teaching have inspired me, and continue to inspire me in everything I do."