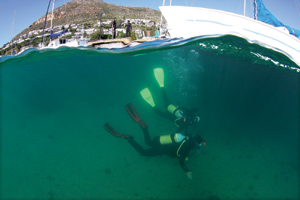 The deep end: UCT students did their best to curb water pollution by cleaning up the seafloor at the False Bay Yacht Club. (Picture courtesy of Sophia van Coller.)

Workers' Day on 1 May saw no relaxation for members of the UCT Underwater Club, with hard graft of a different sort.

Around 40 participants spent the morning cleaning out garbage from the seafloor at the False Bay Yacht Club in Simon's Town. Named cleanDIVER, part of the Underwater Club's DIVER outreach brand, the event aimed to create awareness about marine pollution, and to remove some of that pollution.

The club also promoted and raised funds for its principal beneficiary, the Save our Seas Shark Centre, which is based in Kalk Bay.

The rubbish collected, which is still being audited before being sent to recyclers, included mountains of booze bottles, plastic wrappers, an entire crockery and tea set, a boat pump, a windshield and lots of rope.

Students even extracted an old canoe, which SANParks marine enforcers had to fetch with their boat due to its weight.

Event organiser Raymond Siebrits summed up the atmosphere in thanking the students with a stern statement: "You are the future of environmental protection, the future of advocacy and the fight against apathy."