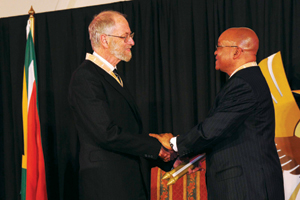 Among the South Africans honoured with National Orders by President Jacob Zuma on 27 April were three recipients with UCT ties.

Following in the wake of a growing procession of UCT scholars to receive the Order of Mapungubwe, made to South Africans who have "accomplished excellence and exceptional achievement to the benefit of South Africa and beyond", Professors Doug Butterworth and Johann Lutjeharms were presented with the award in Silver. Butterworth, of the Department of Mathematics and Applied Mathematics, received his award for his "excellent contribution to the betterment of the environment and sustainability of fisheries; and Lutjeharms, of the Department of Oceanography, for his "excellent contribution to and achievements in oceanographic science".

The third UCT-affiliated recipient was social activist Dorothy 'Dot' Cleminshaw, who holds an honorary doctorate - presented to her in 2002 - from UCT. Cleminshaw received the Order of Luthuli from the President, in honour of her "excellent contribution to the struggle for an equal, just and democratic society". The Order of Luthuli recognises those who have contributed to the struggle for democracy, nation-building, human rights, justice, peace and the resolution of conflict.

Cleminshaw could not make it to Pretoria for the ceremony, so her son Martin received the award on her behalf.