Is there a place for 'race' in a university selection policy? 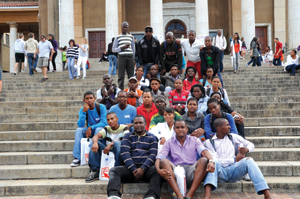 One of the major topics of discussion [at the summit] will be the goal of increasing access to higher education through universities' admissions policies. A key question will be whether race can be used as a criterion in admissions policy.

The best arguments against the use of racial categorisation are based on a commitment to non-racialism. The second key argument against 'race' as a criterion is that it disadvantages white students. A selection policy should recognise ability and hard work, and should not exclude a bright white student in favour of a black student who has achieved far lower marks, solely because the latter is black.

These are the reasons we ought to move away from a 'race' based policy in the long term. We should accept it in the interim only if there is no better solution, and only if the advantages outweigh the disadvantages. In my view, this is the case.

Implicit in the objection to using 'race' is the belief that performance in the school-leaving exam is the only fair basis for rationing admission opportunities. But anyone familiar with the school system will know that the difference between students' performance in a national exam has much more to do with the school they went to, and their socioeconomic status, and the conditions under which they live and learn.

The reason for this is not hard to fathom. For a township student to overcome the odds and get 60% in the Grade 12 exam requires a degree of motivation, commitment and raw talent that far exceeds that of the average Model C or independent school student who has the cards stacked in her or his favour.

Fairness demands that we do not consider marks on their own but that we moderate marks by recognising the obstacles a student has overcome in achieving those results.

There are various ways of doing this. One could design weights to be applied to the marks for different school systems. However, this does not take into account that even within a given school system there will be children with widely varying degrees of disadvantage that affect their school performance.

Another approach would be to have a test that measures academic potential uncontaminated by life opportunities, and select those with equal potential to succeed. Such a test has been the holy grail of those who research selection policy - not only because it may be more fair, but because it would grow the pool of university candidates with a high success rate. Even if such tests existed they could not stand alone, since success at university will always be dependent on mastery of certain subjects to the necessary level. Moreover, fairness would require that motivation and hard work count as well.

Another method, which recognises potential and personal effort, is to put students with comparable degrees of disadvantage into separate baskets, and select the top performers within each basket.

Accepting that disadvantage should have a place in the selection process, why should this translate into 'race'? Statistically, 'race' is a good proxy for disadvantage, reflected by the close correlation between 'race' and class. Given South Africa's history most black people are still relatively poor, and vice versa. Most black students attend inferior schools. However, we are not talking only about poverty and the quality of the school attended, but particularly about 'intermediate determinants' of educational disadvantage. These are factors such as home language, parents' education and their ability to support their children's learning, how early in life one started with educational toys and a stimulating environment, the aspiration inculcated from an early age that one would go on to university and the ambition and scholastic success that this engenders, and a myriad of other subtle influences.

These intermediate determinants also affect our current cohort of black students (born c 1990) from wealthy families at independent schools; as a result, they generally do not perform as well as their white classmates. Clearly this reflects differential background opportunities and support, which signals ongoing educational disadvantage. 'Race' as a criterion therefore captures the history of disadvantage, which has a current impact not measured through household income and school.

Thus the legacy of disadvantage will probably be present for at least two generations after 1994. The use of 'race' to privilege black middle-class students from private schools in most cases compensates for ongoing educational disadvantage (the intermediate determinants), in the absence of which many of these students would have performed better. It effectively recognises potential and obstacles overcome, and therefore is not unfair to their white classmates. The proportion of black applicants that are not affected by that historical, trans-generational disadvantage is so small that very few black applicants are gaining an undeserved advantage.

Ideally, we should have a measure of disadvantage that measures not only current household income and school attended, but also the many intermediate determinants of school performance. This is complex. At UCT we are researching such measures, and hope in time that they will replace 'race'. The effort is necessary because of our commitment to non-racialism. Such a measure will also favour those white applicants whose backgrounds have adversely affected their school performance.

Finally, we believe it is important to seek out black students from relatively privileged backgrounds, because of the impact their probable success would have on our stereotypical perceptions. Destroying racist stereotypes can only be achieved if there are significant numbers of black students at UCT who do well.

I do not dispute that policies using race or disadvantage will reduce the number of white students gaining entry. But we must not forget the context in which white students still currently have access to higher education. Any reduction in opportunities for white students as a result of affirmative action is not nearly as great as it would be if the school system were fixed and there were half a million more qualified black applicants competing for the same number of university places. We need to recognise where the primary unfairness lies.

This is an edited version of vice-chancellor Dr Max Price's op-ed in the Pretoria News, the Star, and the Cape Times on 21 April, ahead of Minister of Education Dr Blade Nzimande's Summit on Higher Education. For the full version please go here.