Ultimate's ambitions thrown for a loop 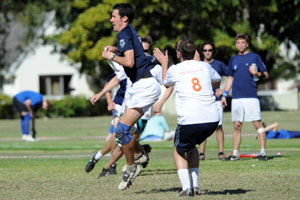 Taking off: Sam Jack (in blue) collects the disc despite the attentions of rival Joel Eilers in UCT's match against Ultitude. UCT won 9-7.

UCT's first team had high hopes for their campaign at the National Ultimate Championships, held at Bergvliet High over the weekend of 1 and 2 May. (See Daily News story) In the end, though, the side had to settle for a disappointing seventh place.

UCT won four out of its five pool games, losing only to the Wynberg-based Chilli, the 2008, 2009 and eventual 2010 champions. Along the way, however, Jon Luies, one of UCT's on-field captains and key to the team's offensive plays, had to bow out after suffering a fractured finger. His omission may have cost UCT dearly as they lost their quarter-final match to Uganda by 8-10.

A win and a defeat in their two subsequent play-off games earned them a final seeding of seven, well short of their semi-final ambitions. More pleased with the outcome of their tournament was the UCT B squad who, despite one player breaking a collar bone, finished a satisfying 10th out of the competition's 12 teams.