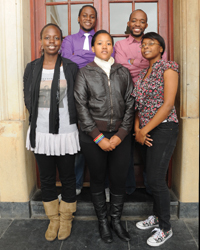 Top trio: The UCT team of (back row) Frank Karigambe and Simisani Moyo, and (front row from left) Phenny Nyamunga, Mangaka Meso and Duduzile Lunga made their mark at the recent AIESEC Student Apprentice Challenge.

The competition pitted students from UCT, the Nelson Mandela Metropolitan University, the University of Johannesburg, the University of KwaZulu-Natal, the University of Pretoria and Wits University in a weeklong succession of tasks, punctuated by talks and skills-boosting seminars. Assignments included coming up with a launch event for a Hugo Boss flanker fragrance for women, developing a business plan for the 2010 FIFA World Cup that would be sustainable beyond the event itself, and marketing the suite of Childline services other than its well-known helpline.

The three UCT students were among the top five to go into the competition's gala finale, where - before a panel of judges made up of top-flight corporate executives - they each had to answer a set of three questions.

In the end UCT hogged the limelight, and the awards, when Meso was named the overall winner, Moyo earned the runner-up spot, and Lunga took third place.

AIESEC is an international organisation formed to help young people discover and develop their leadership potential. It's billed as the largest student-run organisation in the world, and is active in over 1 700 universities across more than 107 countries and territories.