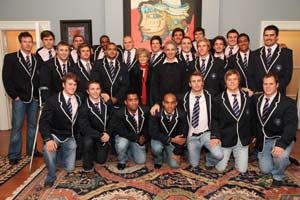 This year, perhaps more than ever in the tournament's three-year history, corporate UCT rallied behind its young players taking part in the FNB Varsity Cup.

And last Friday, vice-chancellor, Dr Max Price, one of those who braved the cold at the games, celebrated the team's runners-up performance with a cocktail event at his official residence at Glenara, attended by players, support team and friends. Price also presented players with their Varsity Cup medals.

UCT still lags well behind other university rugby clubs, especially when measured by its facilities, says team coach, John Dobson. Its budget for the competition is also dwarfed by that of many of its rivals in the competition.

But there's an about-face in the way the game is now viewed at UCT, he admits. And, if not for the moral and financial support from the university, the club may well not have been able to compete in this year's Varsity Cup.

"The university's acknowledgement of the players' and club's achievements over the past couple of months has been fantastic," Dobson says. "And the vice-chancellor's reception at his residence, that meant the world to us."

Without a big-name sponsor, it's unlikely that the club will have its dream facilities anytime soon. But, for now, it's got plenty of support in its corner.