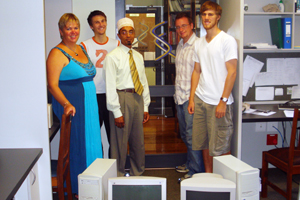 Switched on: Katherine Thomson of the Faculty of Science, Chris Barnett (SCRU), Adiel Hattes of the Leadership College, Dr Karl Wilkinson (SCRU) and Ian Rogers (SCRU) at the handover of computers.

When UCT's Scientific Computing Research Unit (SCRU) - which applies its vast computing platform to research in computational biology, physics, chemistry and biophysics - moved into state-of-the-art modern facilities recently, it chose not to decommission its old and unused computer equipment.

Working with Shanaaz Smith, the Faculty of Science's schools liaison and recruitment officer, the unit then donated these machines to the newly - opened Leadership College in nearby Manenberg. The unit's director, Professor Kevin Naidoo, presented the computers to the school principal, Adiel Hattes, who also had a chance to meet the 'computer construction' team.

"We are impressed with the impact this small donation can make in the functioning of schools at a disadvantage," remarked Naidoo, "and we hope to continue these donations using machines that are not that useful to us, but can be to others upstream of the education and training pipeline."