UCT and Maties go at it again - on the road 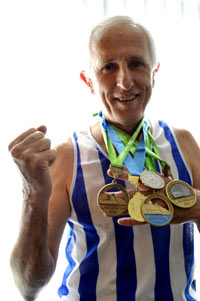 Good old days: Prof Eric Bateman, here with his collection of Two Oceans medals, will join many other alumni in the Intervarsity relay between UCT and Stellenbosch.

The Intervarsity Road Relay, which has seen rivalry between the Cape Town and Stellenbosch Universities for almost a century - well, most certainly from the time of the Great War - is back on the calendar, and will this year take place as a special alumni event a week prior to the Two Oceans Marathon, on Saturday, 27 March.

The relay is a direct spin-off from the annual rugby intervarsity. Since about 1915, a relay was held between the two campuses, ending at the venue of that year's intervarsity clash (so the start alternated between campuses as well).

The race boasts an enviable legacy and a pantheon of runners, including Comrades winner, the late Isavel Roche-Kelly; registrar Hugh Amoore, and Professor Eric Bateman, who last year rounded off his full collection of Two Oceans medals.

The Maties pretty much reigned supreme up to the 1970s, but UCT hit back in the 80s. A shock victory in the women's competition in 1981, courtesy of an exceptional team led by Roche-Kelly and supported by Cathy Fair, Marian Loveday and Merrilyn Smith, got the ball rolling, and in 1985 their male counterparts enjoyed their first victory in 20 years. Honours were shared more evenly in the 1990s. A decline in organisational energy in the clubs - and in numbers of competing athletes - meant that the competition was staged only intermittently thereafter.

But things may be changing.

The response from former Ikey and Matie athletes for this year's race has been overwhelming - perhaps inspired by the country's 2010 buzz - with alumni flying in from all corners of the planet to once again run their favourite legs in the traditional Southern Peninsula nine-leg route.

The relay, together with the Capestorm UCT Memorial 10km on Sunday, 28 March, and the Two Oceans Easter weekend, makes for an eight-day running festival in the Cape this year.

Any past UCT students still interested in taking part in either running the relay or joining in for the accompanying social events should contact Janet Welham or Ruth Robertson, while Stellenbosch alumni can contact Chris Bruwer.