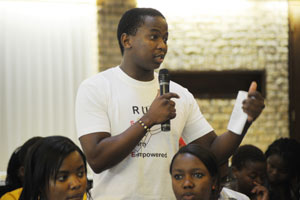 Kopano Malebo, head student of Rochester residence at the health and safety debate.

Recent violent crime incidents around the medical campus have prompted the Health Sciences Student Council to host a safety and security campaign from 1 to 5 March.

Vera-Genevey Baloyi, the council's student wellness officer, said the campaign's objectives were to raise awareness about safety and security in and around campus, to equip students with self-defence skills, as well as make them aware of all the structures and procedures they need to adhere to when they have been victims of a crime.

Basically, we want every student to start making an effort to be accountable for their own safety and security, and for them to be aware of the support structures that have been made available by the university and the faculty," Baloyi said.

She said it all started when the council was alerted that students have become the prime victims of a range of crimes committed on and off campus, specifically around the Observatory area.

"In a space of one year or less, we have had two murders, numerous muggings and a handful of hijackings around the Health Science Faculty and the surrounding areas," she explained. "This intimates that this side of the greater UCT community is the most vulnerable for such events to occur."

Baloyi also said it was worrying that students seem oblivious at times to the dangers around them, and are sometimes negligent about their own safety.

"Furthermore, most students lack vital information with regards to keeping themselves safe, reporting crime, holding CPS officers accountable, and who to go to within student leadership circles should they have comments or questions with regards to safety and safety procedures on campus."

During the campaign, the council used posters, pamphlets, T-shirts, talks and debates, self-defence classes and other fun activities to achieve their set of objectives. The campaign was driven by the council in conjunction with the faculty management, the Students' Representative Council, the South African Police Services, Campus Protections Services and the other student organisations in the faculty. The campaigns will continue throughout the year.

See also information on campus safety on the website.