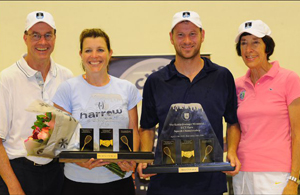 Some of the country's best players turned up for the Keith Grainger Memorial UCT Squash Open, held from 26 to 28 February in memory of the UCT student and keen squash player who succumbed to cancer in 2001.

Among those taking part was Grainger's sister, Natalie, the world number five and the top-ranked player in the US, who had flown in especially for the tournament. Natalie had some stiff competition in the event, including South African number two, Milnay Louw, but she dropped just one game over the weekend - to SA number six, UCT alumna Siyoli Waters (née Lusaseni), in the final - in her title-winning campaign.

Equally efficient was UCT coach, SA number two and winner of the men's section, Rodney Durbach, who likewise dropped only one game over his five matches on the weekend. Durbach beat Greg La Mude, SA number 28, by 11-6, 11-4 and 11-5 in the final.

No fewer than 24 women and 32 men entered the competition. UCT's top ranked men and women's players, Richard Colburn and Jeanae Dumas, did well, finishing 6th and 13th respectively. They also doubled up as the tournament directors for the weekend, with assistance from club chairperson James 'Jimmy' Owen.

The club was able to put on a very professional tournament, with assistance from sponsors Dish Food & Social (a store), New Balance, Bowline Logistics, Harrow, and a financial contribution from the Montgomery and Grainger families.