Reprieve for contractor on campus 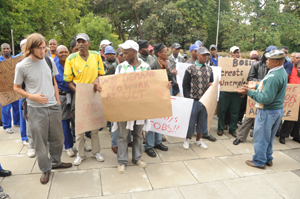 High and dry: Green Perspective workers in an earlier protest at UCT.

UCT rescued scores of people from losing their jobs when it intervened in the crisis that was facing the embattled Green Perspective, a contractor for the university.

Green Perspective was responsible for the consolidation of refuse outside UCT buildings, and also provided horticultural services, but the company was liquidated at the beginning of February, leaving 45 employees jobless.

However, on 19 February the Vice-Chancellor Management Advisory Group agreed to let Turfmech, who maintain UCT's fields, take over the functions of the liquidated company on a one-year contract, and asked them to consider offering the retrenched employees temporary jobs.

This came after an earlier decision to ask Turfmech, as well as Supercare, who provide UCT with cleaning services, to take over Green Perspective's critical functions.

Turfmech and Supercare had then offered jobs to half of the Green Perspective workers, on a casual basis.

At one stage the workers, supported by the Students' Representative Council and the Workers Support Committee, staged a protest demanding that the university make sure that all employees get their jobs back.

John Critien, executive director of Properties & Services, said the agreement was a holding operation, and the way forward after it expires in a year's time will depend on the outcome of the outsourcing policy, which is being reviewed. The review is set to be tabled for the UCT Council on 27 March.

"We do not know what the outcome of the review will be, and will in a position to make long term plans after Council has deliberated," said Critien.

UCT had run due diligence tests with Green Perspective when it first contracted the company, to ensure that it was financially able to fulfil its contract. But it was impractical to check continuously that the company was still viable, explains Critien.

Employees still face another battle - to get monies due to them when the company is wound up.