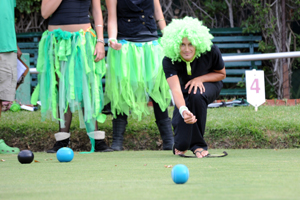 Hair-raising: Not distracted by either his own mane or his teammates' skirts, Francis Moult lets rip.

Despite their hardiest efforts and their very arresting greening campaigns, the student-run Green Campus Initiative (GCI) has not yet become the household name members would like it to be around UCT, especially among their fellow students.

Also, it would appear that some think of them as radicals and extremists. And as the GCI's initiative is to win hearts as well as minds, they thought they'd shatter that stereotype.

So on the evening of 10 February, the Initiative hosted the self-proclaimed "first-ever UCT Green Bowls Championship" at the Mowbray bowling grounds. The emphasis wasn't so much on the competition - the pros may perhaps have frowned on the students' technique, and some of the scorekeeping was downright suspect - as it was on fun, with many adorned in colourfully green costumes. (There were generous prizes for the best-dressed teams.)

"We wanted students to know they can party and still recycle and be environmentally friendly," says GCI member Terence Goldberg. "And we wanted to show that we're just normal people."

Going by some of the outfits, "normal" may be stretching it a bit...