Collaboration milestone reached, thanks to ICTS and SAGrid 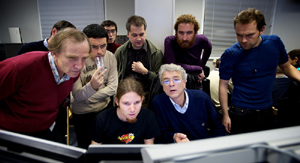 Thanks to the deployment of SANReN and the connection to the SEACOM cable, the improvements in networking have meant that the country's grid computing infrastructure can now move from prototype to production phase.

Working with other sites across the country, UCT's SAGrid core services team has enabled their site to allow analysis jobs from two leading experiments, one in heavy-ion physics and in the other in the life sciences.

High performance computing (HPC) has enabled researchers to analyse data far quicker than before. For example, the creators of an experiment conducted by the UCT-CERN Research Centre at CERN's Large Hadron Collider (LHC) recently published the first paper of the 'LHC era', within days of the data being taken and analysed. This groundbreaking feat was possible only thanks to the highly sophisticated computing infrastructure upon which the experiment relies, and of which UCT is a part, via SAGrid.

Similar HPC services have been deployed around the country, creating a gateway to computing resources that research groups could not access before. The HPC core services team at UCT plays a crucial role in ensuring that the resources at the various sites are properly published and that workloads across the grid are efficiently managed.

A further boost has come from the enablement of the e-Nuclear Magnetic Resonance Virtual Organisation. This project, funded by the European Commission to integrate and interoperate all nuclear magnetic resonance machines with the associated computing infrastructure, will see researchers having transparent access to the computational platforms required for various areas of research in the life sciences.

Researchers undertaking protein studies, folding simulations, structure calculations and drug discovery studies are now able to participate in the e-NMR collaboration, thanks to a memorandum of understanding between the project and SAGrid.

ICTS supplies the essential personnel to deploy and manage the grid, providing transparent access and interoperability between sites to these virtual organisations. The department is making an ever greater commitment to research support on campus by investigating the requirements of scientific communities and feeding the requirements of the South African user community to Enabling Grids for E-sciencE (EGEE), Europe's leading grid computing project.

Through this commitment, ICTS is ensuring that UCT's academics, research projects and all staff scientists and students are included in the global collaboration space.