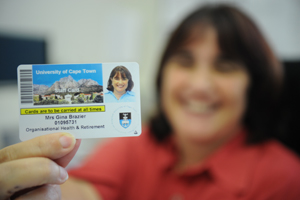 Expect plenty of handyman-type bustle around doorways, security gates and vehicle booms over coming months as UCT overhauls its access-control system in a multi-million-rand project.

Six million rand, to be precise. That's how much the university is investing in a multi-campus-wide upgrade of the system, which will involve issuing some 35 000 new identity cards and replacing hardware – most noticeably the ubiquitous Magstripe readers – in and around 90 buildings, which adds up to some 700 doors, gates and booms. The system has already been installed at Shell Court, the 2 Rhodes Avenue offices and the Bremner Building.

The upgrade has been on the cards since 2007, and for a number of reasons, explains project manager Professor Andy Duncan. For one thing, the current system is underpinned by software developed and still maintained by a former staff member long since retired. So should the proverbial bus come along...

"The system has worked really well for many, many years," says Duncan, "but the arrangement clearly constitutes a risk to the university."

(Information and Communication Technology Services [ICTS] has declined to take on the old system, due to its complexity and lack of documentation.)

In addition, it's getting harder for the university to lay its hands on some of the dated hardware on which the current system is founded.

Kinks in the set-up are currently tackled by the access-control operations staff in Properties & Services, supported by Firespec Systems, Powell Tronics, and ICTS.

Fittingly, the new system comes with a new staff/student card, which on the surface is a dead ringer for the current card, bar a telltale small Impro logo on the face of the card.

But differences run deeper. The new card uses proximity technology and has an embedded radio-frequency identification (RFID) chip. Which means that the user simply has to hold the card up close to the RFID reader, rather than slide it through.

(Duncan demonstrates that the reader picks up on the RFID chip even when the card is still inside a plastic sleeve attached to a lanyard.) So no more double-takes, and flipping the card first this way then that way while trying to figure out which way the magnetic stripe should face.

Going one better, Firespec Systems has installed a state-of-the-art biometric system – using fingerprint identification – at the ICTS data centre in the Bremner Building, as part of the project.

In the transition period between the old system and the new, users will be issued with a card that comes with both a magnetic stripe and the RFID chip, which will be good to go on both sets of readers.

For now, staff and students will generally keep the security profiles they had on the old system. So, should they have and continue to need access rights to more than one building, they'll keep those rights, promises Duncan.

"The basic remit that I've been given is that we are replacing the existing system; we are not significantly changing the methodology or approach to access control," he says.

The installation of the new system should be complete at some time in the second half of the year.

So how does this affect staff and students?