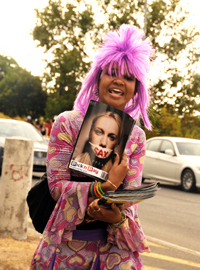 Thanks to 2010 soccer world cup preparations countrywide, UCT's smorgasbord of student activities, orientations and registrations kicked off early this year, early enough for a formal start to lectures on 8 February.

Once again, applications for 2010 were substantially higher than previous years (19 444 'first-choice' undergraduate applicants, 2 041 honours, 2 986 master's and 299 doctoral applications), continuing the year-on-year trend. An interim report on admissions indicates that the hike in applications was accompanied by an increase in demand for financial aid and accommodation.

The Student Housing Admissions office received 13 579 applications from new undergraduate students. Of these, 2 800 were made offers.

Admission processes were under pressure as a result of the late release of the National Senior Certificate results (available to faculties only on 7 January). With an earlier-than-usual start to the year, UCT's faculties worked under huge pressure to complete their processes. Hats off to them.