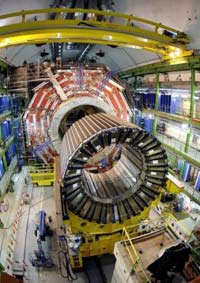 (Photo courtesy of The Independent.)

On 23 November 2009, the first collisions between protons of the Large Hadron Collider were delivered to the four experiments at the accelerator in Geneva, Switzerland.

Four days after the first collisions the first paper was published by the ALICE (A Large Ion Collider Experiment) collaboration in the European Physics Journal (it was accepted within 24 hours!) and many among its large number of authors are from the Cape Town region: about half from UCT and the other half from iThemba Labs.

The UCT group is led by Professor Jean Cleymans, of the Department of Physics, chairperson of the SA-CERN Programme, and Associate Professor Roger Fearick.

This paper was based on only four hours of data taking and a larger data run will take place next week.

"We are very proud of our colleagues that are helping to answer fundamental questions about the nature of matter and the fundamental forces that govern the universe," said deputy vice-chancellor of research, Professor Danie Visser.

"The Large Hadron Collider is now fully operational - and, by the way, there is no evidence of black holes yet!"