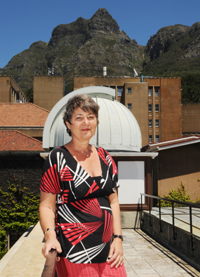 Space odyssey: Prof Renée Kraan-Korteweg, head of the Department of Astronomy, which has been awarded the chair in Extragalactic Multi-Wavelength Astronomy.

The Head of the Department of Astronomy, Professor Renée Kraan-Korteweg, is delighted that astronomy at UCT has been awarded the Chair in Extragalactic Multi-Wavelength Astronomy, part of the South African Research Chairs Initiative in collaboration with the South African Square Kilometre Array (SKA) office.

The news was announced at the SKA Bursary and Fellowship Conference in Stellenbosch on 2 December, opened by Naledi Pandor, Minister of Science and Technology.

The Chair in Extragalactic Multi-Wavelength Astronomy is one of five Research Chairs dedicated to the SKA project. The Chairs are awarded for 15 years, and are worth R240 million.

The new Chair will focus on galaxy formation, evolution and cosmology through radio observations and will be 'embedded' in the Faculty of Science's Astrophysics, Cosmology and Gravitation Research Centre.

"The support for the new chair is very good. In particular, the National Astrophysics and Space Science Programme and Cosmology Group computing laboratory and the national Centre for High Performance Computing will provide excellent computational tools for the activities linked to the Chair," he added. "A high-speed wireless connection is under construction to link the KAT office with UCT and the South African Astronomical Observatory."

South Africa as a hub

"South Africa is rapidly becoming a major international hub for ground-based multi-wavelength astronomy, by virtue of its geographical advantage and the construction of world-class facilities," said Kraan-Korteweg.

Both South Africa and Australia have been short-listed to host the SKA, which will consist of thousands of dishes and radio-wave collecting devices, offering vast computing power (according to an online report, Dr Bruce Elmegreen of the Physical Sciences Department of IBM's Research Division estimates that the SKA's computing power will be equal to all the people on the planet doing a billion calculations per second simultaneously.)

If South Africa is chosen as host, this equipment will be spread over a vast area of the arid Karoo, but will act as one instrument with a joint receiving surface of one square kilometre.

This will detect very faint radio-wave signals from deep space - radioactivity left after the big bang, when the Universe is thought to have come into being - allowing astronomers to look back in time, back to the early origins of the Universe.

Both bid contenders are building radio telescopes or 'pathfinders' to contribute to the SKA technology. Each pathfinder telescope will be a premier telescope in its own right.

South Africa has begun construction on the Karoo Array Telescope, or MeerKAT, in the Northern Cape, which will contribute to the development of the technology required for the SKA. This offers a radio telescope of 80 12m dishes. In addition to the Southern African Large Telescope (SALT) it will significantly boost the country's research capacity in astronomy and provide opportunities for technology and knowledge transfer.

The new Chair in the Astronomy Department augurs well for the development of radio astronomy through undergraduate and postgraduate student programmes at UCT. Many are supported by SKA bursaries. Hosting the SKA in South Africa will boost the development of high-level skills and cutting-edge technology infrastructure in Africa, and will also attract expertise and collaborative projects to the continent.

Already the South African SKA Youth into Science and Engineering Programme is feeding a steady stream of high-level expertise into the continent's SET system that will help Africa advance radio astronomy and its related sciences and technologies.

Among the student research promoted at the conference were the six "most innovative SKA research projects", including two from UCT: one by Jason Manley (titled Large N Correlator), and one from Edward Elson (titled New insights into the dynamics and evolution of the blue compact dwarf galaxy NGC 2915 - see story on pg 4).