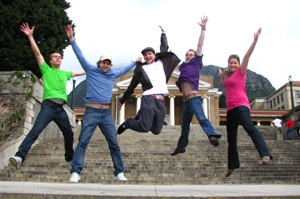 The 2010 Soccer World Cup has accelerated South Africa's need to improve its public transport system, which has led a team of UCT students to design a computer system to revolutionise the lives of commuters.

The Starfish system was unveiled at the annual UCT Department of Information Systems Project Expo to showcase computer applications developed by senior students.

A travel-card-based transport payment system, similar to those used in London and Hong Kong, the Starfish concept could reduce the time spent in queues, as well as making the public transport system safer and more efficient.

The team's lead programmer, Amber Osborn, says: "The South African public transport system is unreliable, inefficient and has the potential for corruption. Trains and buses often require an exact payment, which is frustrating, and carrying cash or anonymous tickets may incentivise crime."

The Starfish system uses cards loaded up front with cash, which can be scanned at a turnstile, where the exact fare would automatically be deducted. With photographic ID on the cards, crime would be reduced, as a stolen card would not be very useful to a thief. The potential for recouping the money on a stolen card has also been built into the system.

The system has been designed to assist both commuters and transport operators. Commuters will get more value for money, with more efficient service, and operators will have the opportunity to create special cost packages. Commuters can also use a single Starfish card to pay for multiple forms of transport, such as buses, trains, and taxis, and manage their cards and accounts online, which would include access to tailored reports and their personal travel records.

And for those wondering why it's called Starfish, it's because there are five members in the team.