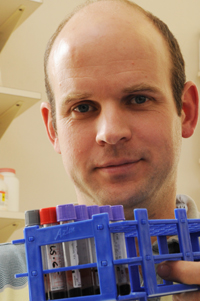 Based at the Lung Infection and Immunity Unit, Van Zyl-Smit, 36, argues for a new TB-testing regime in a paper published in the American Journal of Respiratory and Critical Care Medicine, aka the Blue Journal.

Although opinion is divided and the issue hotly debated, the standard TB-testing protocols are straightforward: either a single blood-based test, as recommended by the US Centres for Disease Control and Prevention, or, as they do in the UK and Canada, a skin test followed by the (pricier) blood test for confirmation.

It's the latter protocol that first-author Van Zyl-Smit addresses in his paper, Within-Subject Variability and Boosting of T-Cell Interferon-? Responses after Tuberculin Skin Testing.

The origin of his argument is that in the skin test, known as the tuberculin skin test, a small dose of purified TB-protein derivative is injected just under the top layer of the skin on the inner forearm. The harmless protein acts as an antigen, so if the person has been exposed to the TB bacterium (Mycobacterium tuberculosis) before, or is still carrying it, the protein shot would trigger an immune response in the skin almost instantly.

Van Zyl-Smit's concern is that the skin test may leave traces of the TB protein in the system, which would then be picked up by the blood test. That could lead, mistakenly, to a positive diagnosis.

"The big question is, if you do the skin test first, does it affect the blood test?" he explains.

In their own study, Van Zyl-Smit and his collaborators did three to four blood tests - using two standard kits - with some of the subjects, to illustrate the natural variability in the body's T-cell interferon-? responses. These interferons are proteins produced by the cells of the immune system (those 'helper' T-cells) when the body's under attack from 'invaders' such as bacteria, viruses or parasites.

Once he'd established a baseline interferon-response level, Van Zyl-Smit conducted the skin test with his subjects, followed by a second series of blood tests over three months.

As he suspected, the second set of blood tests indicated that the subjects were carrying the TB bacterium, when in fact they weren't.

"Which means you shouldn't give a blood test after a skin test, which most international guidelines suggest you can," Van Zyl-Smit sums up. "You need to interpret the blood tests cautiously."

However, with both blood-test kits, Van Zyl-Smit did show that there is a three-day window period after the skin test within which interferon-response counts remain normal. But by day four the interferon levels had jumped sharply, and kept climbing for the next 81 days, after which Van Zyl-Smit stopped his tracking.

His results are of particular importance to those who undergo serial testing, such as healthcare workers who work with TB patients and who, statistics show, are hands-down the ones at greatest risk and in need of constant monitoring. False tests could mean regular but unnecessary treatment that could, in turn, lead to complications, such as drug resistance.

"This study is helpful to clinicians, as they can now be reassured that results from the blood test are accurate and valid if performed within three days of the skin test," says his supervisor, Associate Professor Keertan Dheda. "It also provides clinicians with cut-points defining how the test should be interpreted within specific contexts."

Van Zyl-Smit's paper - his first big one - in the journal, also known as the American Thoracic Society's Blue Journal (the colour of the cover), came as a double whammy.

Not only does the journal have the highest impact factor in the world among respiratory-medicine journals, but the paper also earned the authors coverage in the editorial, marking it as the article's first official citation.