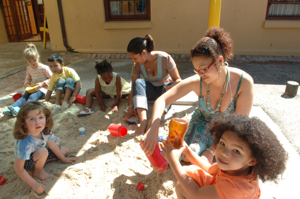 Difficulties facing student parents and a desire to support struggling children has prompted UCT student Yvette Adams to launch a new UCT society, which is to be called Student Parents on Campus.

The initiative draws on Adams' own situation as the single parent of a two-year-old son, and is aimed at meeting the academic, social, and family needs of full-time students who also happen to be single parents.

The complexities of being a student and a parent, as well as the lack of support and empowerment for this special group, are a problem. According to the UCT Educare Centre, 35 of the 75 children attending the centre belong to student parents.

Adams and fellow student Gill Balie feel that a new society was the best way to go. The society, Adams said, would be an interactive forum where parents can share advice, experiences, resources and academic assistance - all towards living a more balanced life, as they often spend little time with their children.

The society is completing the final draft of its mission and vision statements, which will include an 'outreach' element aimed at encouraging and supporting pregnant high-school learners. Reflecting on how difficult her past two years at UCT have been, Adams says:

"You live for a night out, but instead of going out clubbing you wake up at 2am to get to your books because that is the only time you get to study."

And when a child is sick and cannot go to crÃ¨che, parents have to stay home and miss lectures.

Balie, for example, was made to fail a test because of such a situation.

As if the rigid administrative formalities were not enough, there is also a stigma attached to being young single parents.

There is a notion that it's a self-made problem, with immoral overtones, which the young single parent should 'pay' for, said Adams.

"We don't promote pregnancy, but want to encourage young parents to study further, and reassure them that having a child is not the end of the world."

The society needs 25 members to be recognised as such at UCT, and Adams therefore wishes to appeal to other young parents, mothers and fathers, to indicate their interest in this venture and to come on board.