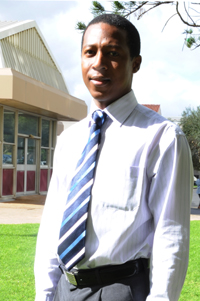 Dr Ntobeko Ntusi, a final-year medical registrar in the Department of Medicine, has won the prestigious Nuffield Oxford Medical Fellowship.

On par with the Rhodes Scholarship as an esteemed route to Oxford University, the Nuffield scholarship was set up by Lord Nuffield, who made his fortune in producing Morris cars, to benefit medical students in the UK's former 'dominion' states. Today, countries that benefit from the award include Australia, New Zealand and South Africa.

Ntusi will use his three years at Oxford University to continue his research on magnetic resonance imaging, a method used to examine inflammation in the heart. When he has finished, he plans to return to South Africa to continue his career in academic medicine.

The Nuffield scholarship continues to play a role in South Africa by giving students the opportunity to study at Oxford, says head of the Department of Medicine, Prof Mayosi Bongani, who won the award himself in 1997.

"You could say it's the Rhodes Scholarship for old people, as academics of any age can apply," he quips.

"I'm quite honoured to be named for this scholarship, as well as excited," says Ntusi. "It's a novel project to be working on, so I'm looking forward to 2010."