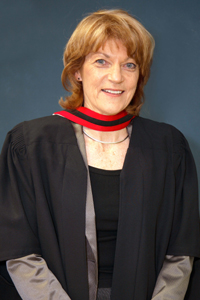 Public health priority: Intellectual disability has been at the heart of Prof Colleen Adnams' research and clinical work since she was appointed head of the Child Developmental Service in 1994.

There is a dearth of research relating to issues of intellectual disability in South Africa, and government must recognise it as a public health priority, along with mental health, said Professor Colleen Adnams in her recent inaugural lecture.

Adnams cited a study undertaken by Dr Maureen Durkin of the University of Wisconsin-Madison, which shows that although more than 90% of children and families affected by developmental disabilities are likely to live in developing countries, the majority of research and clinical service in this field takes place in wealthier, developed countries.

This is the case in South Africa, where 3.6% of children have some form of intellectual disability and public health resources are limited. Many of these cases may be attributed to Foetal Alcohol Spectrum Disorder, a cause of intellectual disability that has been at the heart of Adnams' research and clinical work since she was appointed head of the Child Developmental Service in 1994. She was instrumental in setting up Developmental Paediatrics as a national sub-speciality for this rapidly advancing clinical field.

In his vote of thanks, Professor Dan Stein (head of the Department of Psychiatry and Mental Health) paid tribute to Adnams' work, and described her as someone who has the means to "bring intellectual disability to the forefront". He described her as a team player and a fighter for the underdog, and praised her ability to mentor other people.