A day in a life of the Media Relations Unit 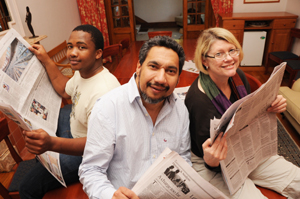 The Media Relations Unit, part of the Communication and Marketing Department headquartered at La Grotta on middle campus, is staffed by media manager Ray Hartle (middle), media liaison officer Pat Lucas, and intern Bongani Kona (left), who is doing his master's at the Centre for African Studies.

What does the unit do on a day-to-day basis?

Crisis communication, media scanning, advising the VC on thorny issues, dealing with the bereaved parents of students who die, attending court cases involving UCT, organising press conferences– any mix of the above fills their days, nights and sometimes weekends. (Their cell phones are seldom off.)

First thing in the morning they scan the newspapers, looking for any mention of higher education or UCT. This information goes into a daily media report for different stakeholders, such as university management. They compile reports on issues flagged in the media, to keep UCT one step ahead - for example, during the swine flu scare. To help them scan the gamut of news, they use monitoring services such as Meltwater News and Monitor South Africa.

What are the challenges?

Getting strategic information into the media. "Often the media call us and want us to say certain things, to answer certain questions. But we also want to get out to the media the message the vice-chancellor wants to get out, in terms of where UCT wants to go," Lucas explained. Monitoring social media (traditional media are no longer the only means of mass communication) is also a challenge. "How do you use things like Twitter and Facebook strategically?" said Kona. Hartle added that the general elections earlier this year were a good example of how media is used and even abused. "If you followed the commercial media in this election you would have had an idea of what the outcome would be. Actually, the outcome was totally different to what the media were saying." To deal with such challenges, the team is considering exploring different ways of getting into social media, such as blogs.

What are the highs and lows of the job?

The interesting community and the beautiful campus are pluses. But the decentralisation can be both problematic and positive. Academics are encouraged to share their expertise, but sometimes it can be hard keeping a handle on everything going on, especially as academics are free to talk to the media about their area of research without working through the media relations team. Sometimes it's necessary to ensure that the media are aware that an academic's view on corporate matters is not necessarily an official view. Media queries come thick and fast from all corners, and it can be a huge mission to track down an expert to comment on an urgent story.

What is the weirdest thing they've encountered?

They get a lot of irrelevant media queries on a weird and wonderful range of topics, from canola oil hoax emails to more serious matters. More recently, Bart the baboon was a regular visitor to their office. Once, a journalist called the unit enquiring about the surnames of coloured people named after months. "He'd heard of Mr January, Mr April and Mr October, but he'd never heard of a Mr December," said Hartle. "I must confess I did not manage to find an expert at UCT to respond to that."