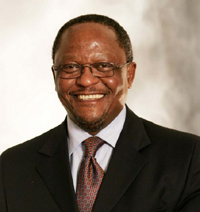 "The role that art and literature play in political struggle has been a central theme in Ndebele's work," said a statement from the NRF. "His books and incisive political commentaries have reflected on the tone of South Africa's struggle for liberation. He has been a leading light in the Congress of South African Writers (COSAW) and remains its honorary life president."

One of South Africa's literary icons, Ndebele received worldwide acclaim for his work, which includes The Cry of Winnie Mandela, the children's book Bonolo & and the Peach Tree, Rediscovery of the Ordinary, and Fools & Other Stories.

Much of Ndebele's working life has been in academia. He also chaired the South African University Vice-Chancellors' Association. While he was vice-chancellor of the former University of the North (now Limpopo), he was active in the Forum of Historically Disadvantaged Institutions. In addition, he served as vice-rector at the University of Western Cape and pro vice-chancellor at the National University of Lesotho.

His life's work has been acknowledged across the globe through awards and a clutch of honorary doctorates, including one from his alma mater, Cambridge University.

Vice-chancellor Dr Max Price said: "UCT is doubly proud that Emeritus Professor Ndebele, named by the NRF as a leading light among South African writers, continues to work as an academic at UCT, having also contributed his wisdom and leadership to UCT as its former Vice-Chancellor."