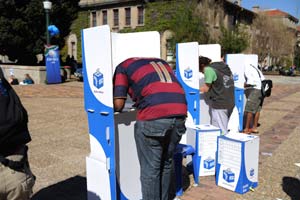 Improving student services, transformation and women empowerment were some of the campaign platforms as students across UCT took to the polls this week to elect the new Students Representative Council (SRC).

Thirty-five students were battling it out for the 15 seats in the SRC committee to serve the 2009/2010 term. In the process, candidates came up with a number of promises that they said would improve students' lives and secure them proper representation at UCT.

The Free UCT group and the Congress of the People UCT are the new kids on the block with seven and four candidates, respectively.

Other hopefuls come from the Democratic Alliance Student Organisation with eight candidates, the South African Student Congress with five, and 10 independent candidates.

Students can vote on all campuses, residences and via Vula. Polls close on 28 August. Counting is set to take place a day later and the provisional results would be announced on 31 August.