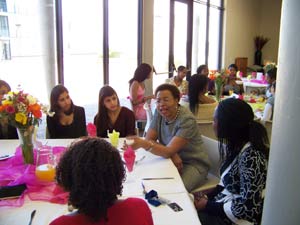 UCT Chancellor Graça Machel celebrated Women's Day by fulfilling a promise she made two years ago, at the official opening of the residence hall named after her. She came back to tell "her" residents how proud she is of them and how much she expects of their generation.

She returned to Graça Machel Hall on Women's Day to speak at a brunch hosted by the residents in her honour.

"You are born free," she told her audience, pointing out that they are too young to remember apartheid. "And freedom comes with responsibility. How do you want to take this continent to a different level?"

She offered examples of what she expected today's UCT women students to say after the next five decades: "We brought down infant mortality and maternal mortality. We brought down the incidence of HIV/AIDS. We can feed our own people."

She said that while the women of her generation had sacrificed to help end apartheid, "even in today's world, women are still not given the same value as a man. The biggest challenge families face today is gender".

She described struggles women and girls still face. "In some parts of the world people will abort a child just because she is female."

Machel spoke out against forcing a girl to suffer genital mutilation against her will. Similarly, she added, "Someone decides that at a certain age, a girl must be married. And they will choose who she will be with for the rest of her life. That is an assault on her dignity; on her rights as a woman."

The challenge of women studying at UCT today would be "to take the struggle of women to a higher level", she said. "Women have the same job, the same education [as their male counterparts], but they get less in terms of salary - because they are women. Education "is a tool to allow you to fight in a world that will try to keep you down...Your much higher task will be to change the way society looks at, thinks about and treats women."

At the brunch, Graça Machel Hall residents honoured their peers with the following Distinguished Lady Awards: