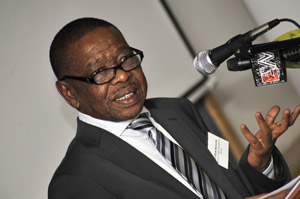 The Soudien Report on discrimination "lifted the lid on a shameful feature of higher education institutions in South Africa".

So said the Minister of Higher Education and Training, Dr Blade Nzimande, in his address on the report, which was headed by UCT Deputy Vice-Chancellor Professor Crain Soudien, at the Third Annual Anti-Racism Colloquium at the Graduate School of Business on 16 July.

Nzimande noted that key findings of the report included continuing inequalities in participation rates, throughput and success rates, as well as access to postgraduate programmes. The committee also found that progress in student equity - "limited as it may be" - has not been matched by progress in staff equity, said Nzimande.

"In my view, our democracy is threatened by the very things we seek to overcome - racism, sexism and class inequalities. These three issues, while deeply integrated, are not the same things. They are each distinctive forms of discrimination and cannot be reduced into one another. And they each cannot be fully understood outside of the others."

Nzimande argued that the notion that racism is "merely a hand-over from the past" is false.

"Racism is continuously reproduced by the continued existence and perpetuation of class and gender inequalities as well as patriarchy," he said.

He also noted that covert discrimination presented the greatest challenge, arguing that acts of explicit bigotry, such as the videotaped incident at the University of the Free State, which gave rise to the Soudien report, are met with public outrage. Meanwhile, covert forms of racism remain prevalent.

"The one distinct example of this is around language and arguments for the continuation of single medium-schools and Afrikaans only universities," said Nzimande. "The proponents of these campaigns use constitutional rights guaranteeing the existence of all official languages to perpetuate the exclusion of, and racism against, black students. Discrimination comes in many guises and pretexts which therefore requires us to continuously unmask and expose it."

Nzimande also put the media under the spotlight.

"It is no secret that the media in South Africa does not reflect the voices nor serve the interests of the majority of the citizens. In fact, it does not even aspire to do so and panders unashamedly to class and financial interests."

In response to the report's findings, Nzimande proposed the establishment of institution-based as well as national ministerial monitoring.

A higher education stakeholder summit is planned for 2010 to discuss the recommendations of various institutions on the Soudien report.

"It is my intention that the summit will result in the establishment of a national stakeholder forum for higher education where all these issues can be discussed and debated on a continuous basis.