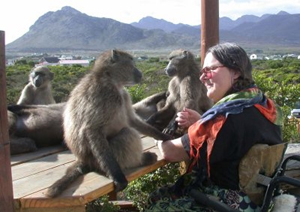 Dr Kate Jagoe-Davies, founder of the Disability Unit at UCT and wife of Emeritus Professor Bryan Davies, died on 8 July after a long illness.

A vociferous activist for the rights of the disabled, Jagoe-Davies established a tape-reading service at the height of the liberation struggle in the early '80s, drawing from volunteers, to give her blind friends access to banned literature that would otherwise not have been accessible to them.

Jagoe-Davies received two honorary doctorates, from Rhodes in 1993 and from UCT in 2003, for her work in improving the lives and prospects of people with disabilities.

"It would not be over-fanciful to claim that the existence of HEDSA has come to be because, on a fateful day, an exuberant young Kate dived off a rock into water that proved not to be deep enough and broke her neck," says Reinette Popplestone, manager of Disability Services.

"Kate participated with equal zeal in two different struggles: the liberation of her country, and a better dispensation for the disabled people who live in it."